I just went on the most wonderful vacation to South America. The people were friendly, the land was beautiful, and the food was exquisite. Of the many delicious desserts that I tasted, one cake stood above the rest.

Tres Leches cake, or “three milks” cake, is a rich vanilla sponge cake served with a whipped cream topping. Many historians believe that the cake was created in Nicaragua in the 1800s. Others think that the cake was a business idea used to promote the sale of evaporated and condensed milk. In fact, Nestle may have posted a recipe for the cake on the back of their condensed milk cans (1).

To be honest, whoever invented this cake was a genius.

Its unique texture is unlike that of any cake I’ve ever eaten. It feels like an airy, wet sponge that doesn’t lose its firmness. The cake achieves its consistency as air bubbles are incorporated into the batter by making a meringue, and then it’s submerged into a mixture of sweetened condensed milk, evaporated milk, and whole milk  (2).

All of us are familiar with whole milk, but how exactly are condensed milk and evaporated milk created?

Condensed milk is made by removing a fraction of the water found in milk. Two preservation techniques were developed to prevent the overgrowth of bacteria in condensed milk. One way involves adding sugar particles (solutes) to the milk medium (solvent). This process increases the osmotic pressure of the milk, which means that the bacterial cell membranes will shrink as water moves out of their cells and into the milk (3). Bacterial cells cannot survive, and spoilage is controlled. This product is known as sweetened condensed milk.

Heat treatment is the second way that condensed milk can be sterilized. The original idea for this preservation process was invented by Gail Borden, who attempted this heat treatment method by using a vacuum system. Only small amounts of sterilized product could be produced at specific times, so John Meyenberg of Switzerland took this process a step further and sterilized the milk in tins with heated steam (4). Today this product is known as evaporated milk. Evaporated milk can be made directly from raw milk since it gets treated with heat during processing (5).

Ready to use these fascinating ingredients?

***IMPORTANT: Allow the eggs to come to room temperature before using them in this cake recipe.

Mix the flour and baking powder in a medium bowl.

Separate the egg yolks from the egg whites, and place each into separate small bowls.

In a large mixing bowl, mix the egg whites on high speed. You can use a whisk, a hand mixer, or a stand mixer. Let the egg whites whip until they turn into a white foam. You will notice soft peaks when removing your whisk from the mixture. This allows for enough air to be incorporated into the egg whites.

You are basically creating a meringue! This will give the cake a light texture due to the formation of air bubbles. 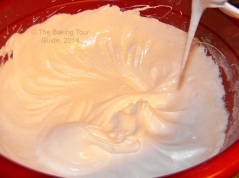 While the mixer is running, gradually add the sugar, about 1 Tbs. at a time, until stiff peaks form. The entire process can take about 15 minutes. For more information, please visit French Meringue, “Two Ways.”

Once stiff peaks are achieved, beat in the egg yolks, 1 at a time.

The final batter will have a smooth, light, and airy texture.

Quickly add the flour mixture and the whole milk, alternating between the two. Add the vanilla extract.

Place parchment paper into the baking pan, and lightly grease it with coconut oil or butter. 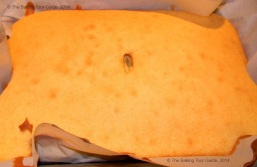 The cake will have a golden appearance.

Put the cake into the oven and bake it until it’s golden and a knife comes out clean from the center. This will take about 25 minutes.

Once the cake is finished, cool the cake in the pan for about 10 minutes. Make the milk mixture during these 10 minutes.

Place the condensed milk, evaporated milk, whole milk, and melted butter into a blender. Blend the mixture until everything has combined evenly.

Invert the cake onto a larger pan.

After 10 minutes, take the cake out of its original baking pan and invert it onto a larger baking pan that is at least 1 inch high on all sides. I used a 10 x 15 inch glass pan that had a 2-inch height.

Poke holes into the inverted cake using a thick skewer. If you don’t have skewers, then feel free to use a chopstick or clean pen. 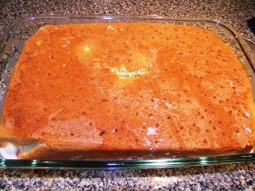 Pour the milk mixture over the entire cake. Cover the cake with plastic wrap and place it in the fridge overnight, or at least 4 hours.

Place a whisk and large bowl in the refrigerator to make the items cold. Remove them after 10 minutes.

Add the heavy cream to the bowl and start whisking vigorously. Slowly add the sugar once soft peaks have formed in the cream.

Do not continue whipping the heavy cream once you see soft peaks. You may achieve a gritty texture if you over-whip it.

Take the cake out of the refrigerator and spread the whipped cream over it. Sprinkle some cinnamon on top for extra flavor.

Congratulations on making your first Tres Leches cake! Cut your first slice, and notice the texture of the fluffy sponge cake. You barely need to put any pressure on the knife in order to grab your first slice of the dessert.

Be warned- it’s so good that you may wind up eating all of it in one sitting! 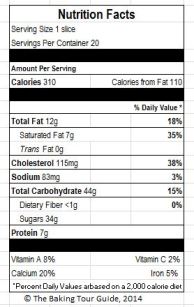 Nutrition facts for 1 slice of Tres Leches cake based on the USDA nutrient database.

As promised, my Tarragon, Sage and White Wine Mussel recipe is #ontheblog #link at https://thebakingtourguide.com/2019/07/24/tarragon-sage-and-white-wine-mussels/
Just what I needed on this hot day 🔥 a piña colada icy roll🍍#icyroll #icecream
Hey insta, it's been a while! Check out these mussels 💪😉 Recipe coming soon!
Thanks for a great last meal on my trip to Orlando, @thepolitepig #allthefood #nofilter #pulledporksandwich
Ate my way through @officialepcotcenter tonight 🏰 #allthefood
When you're trying to teach your babies portion control, and they're having none of it...