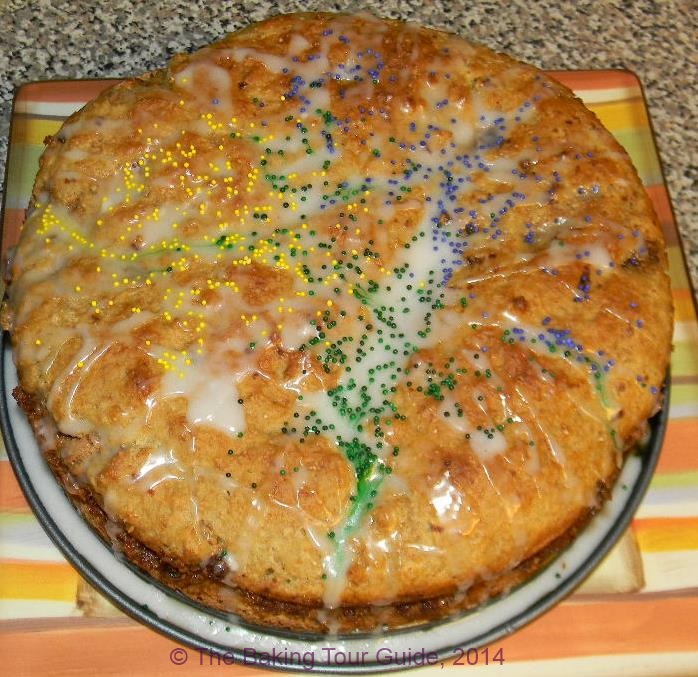 Happy “Fat Tuesday,” everyone! Today ends Mardi Gras, a season of Carnival celebrations that finishes right before Ash Wednesday. The festival begins on January 6th, which is thought to be the day that the gift-bearing Magi looked for baby Jesus. This day arrives 12 days after Christmas to commemorate the three biblical kings, and it is known as the “Epiphany,” the “Twelfth Night” and “Kings Day.” New Orleans adapted their elaborate version of Mardi Gras from the Europeans in the late 1800s. 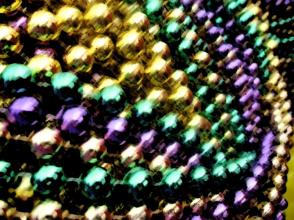 Mardi Gras is known for its delicious traditions, with its most popular dessert being the King Cake. King Cakes were originally made of cinnamon dough, and most of today’s versions contain a robust cinnamon flavor. The cakes are covered with purple, green, and gold sprinkles to signify justice, faith, and power, respectively. A figurine of baby Jesus is usually put inside the cake. Whoever finds the baby is said to have good luck, and must make the cake for next year (1).

King Cake recipes typically call for yeast to form the batter and dough. The process of making dough and quick breads was discussed in previous posts, but we need to pay a little more homage to yeast.

It’s essential to know how to properly activate yeast in order to make a King Cake.

Yeast is a fungus that is typically dormant, or “asleep.” There are tons of yeast varieties, and many can actually be found in the human body. Saccharomyces cerevisiae is the most common species of yeast used for baking.

Yeast was isolated for baking during the 19th century, but it was difficult to prevent the yeast from dying before using it in cakes and breads. Bakers developed a method to see if the yeast became deceased. Bakers attempted to awaken yeast from its deep sleep by subjecting it to liquid. It works on people, right?

A foaming process occurs when yeast is added to a cup of milk or water with sugar (2).

The activation of yeast with liquid is known as proofing, and the foam signifies that the yeast is alive (eating sugar and replicating).

During proofing, the yeast replicates and feeds on sugars in the flour. This eating leads to fermentation that forms carbon dioxide and alcohol. That’s why dough smells slightly like wine for a short period of time, although the smell disappears because carbon dioxide becomes the dominant byproduct.

You won’t be seeing yeast taking the polar plunge anytime soon, because yeast is sensitive to temperature. Proofing works best when the liquid is 105-115°F. The yeast will remain dormant if the temperature is too cold, just as freezing and refrigerating slows down the action of microorganisms. Liquid that is too warm will kill the yeast and prevent the dough from rising.

Now I’ve shown you how to “prove” that your yeast is alive and active! Let’s bake our King Cake.

March is National Nutrition Month, so this recipe will be a lower calorie version of a traditional King Cake.

Some notes about the cake ingredients:

Avocados serve as a 1:1 replacement for butter. Avocados provide recipes with healthy monounsaturated and polyunsaturated fats, whereas butter adds unwanted saturated fat to the cake.

Bananas commonly replace eggs in vegan recipes, because they can add density to cakes. Since this particular cake uses yeast, there is no need to add a chemical leavener to help the cake rise. However, many recipes that use banana replacements also add baking soda.

Browner bananas are preferred for baking. The browning is caused by an enzyme called polyphenol oxidase (PPO), and its reaction increases the sweetness of the fruit. If you bought green or just-ripe bananas for this recipe, then you can toss the fruits into a paper bag for a little while to promote the browning process.

You can use a 6-cup Bundt pan for this recipe. If you don’t have a bundt pan, then an 8″ round cake pan should work. I used a 9″ Springform pan, but that size seemed a little too big. Grease the pan of your choice.

For the filling, soak the raisins in a cup of hot water for at least 15 minutes. This will allow the dried fruit to become plump. Set the cup aside, and then start building your cake.

Begin to proof your yeast.

Can you see the foam and bubbles?

Add the yeast to the milk and mix well. Set it aside for five minutes.

Mix half of the all-purpose flour (3/4 cup), half of the whole wheat flour (1/2 cup), brown sugar, and sea salt salt together in a large bowl.

Mash half of an avocado. Add 1/4 cup of the mashed fruit to the mixture.

Yes, I said fruit. Fruits are products of trees or plants that contain seeds. An avocado is considered a fruit in the science world.

Once the proofing process has completed, add the contents to the large bowl and mix well.

The batter is a little green from the avocados. Hey, it’s Mardi Gras!

Using a handheld mixer or whisk, beat 1/4 cup of the mashed banana into the large bowl. Repeat two more times. Make sure to fully incorporate the fruit it into the batter (as you would normally do when adding eggs).

Stir in the vanilla extract. Add the remaining 3/4 cup of all-purpose flour and 1/2 cup of whole wheat flour into the large bowl. Mix the flours into the batter until a uniform texture is achieved.

Cover the batter with plastic wrap. Set it aside for 10 minutes. Make the filling as the batter is resting.

Drain and dry the raisins. Place the cottage cheese, brown sugar, ground cinnamon, raisins, and vanilla extract in a food processor or blender. Blend the filling until smooth, or leave it a little chunkier if you prefer a coarser texture.

When the 10 minute rest period has passed, uncover the batter and pour half of it into the pan.

Scoop all of the filling onto the bottom later of the cake and smooth it with a spoon. Pour the remaining batter on top of the filling. Use a spatula to even the top layer. I even used my fingers to spread the batter around.

The batter should double in size!

Cover the assembled cake with plastic wrap and let it rise for 1 1/2 to 2 hours.

Preheat the oven to  350°F. Bake the cake for 30 minutes, or until the top looks golden brown. Set the cake aside to cool.

While the cake is cooling, make the icing. Mix the confectioner’s sugar and water until it becomes a smooth liquid. Drizzle the icing all over the top of the cake. Decorate the cake in festive Mardi Gras colors using sprinkles or food coloring.

You will be able to taste the bananas, but the filling offsets the banana flavor with hints of cinnamon and vanilla.