An apple a day keeps the doctor away. So why not put it into a dessert? I’ve been on a huge bread kick lately, but I didn’t necessarily want to make apple bread. What dessert incorporates a bread-like texture while allowing the apples to shine?

It finally came to me- shortcake!

Shortcake is a dessert version of a biscuit that’s usually served with fruit and cream. The bread is strong enough to hold fruit juices and cream without forming a squishy consistency. The term “shortcake” stems from the 15th century British word “short,” meaning crumbly (1).  Shortcake also contains shortening, which is fat that is used to make crumbly pastries (2). The word was originally used in a recipe for unleavened cookies in an English anonymous cookbook in 1588. Shakespeare later used it as a character’s name in “The Merry Wives of Windsor” (1).

In the 19th century, Americans distinguished their own version of shortcake by adding potash, a potassium compound, and baking soda. Chemical leavening agents made American shortcakes less dense than the English versions. The leavened cakes became an extremely popular pastry, and eventually led to the development of “strawberry shortcakes” (1).

For this recipe, we will be using apples, but feel free to use whatever fruit filling you desire.

My last post described pizza dough, which is a normal bread that is leavened with yeast. A shortcake is known as a “quick bread,” which is a bread that doesn’t use yeast to rise. Quick breads include doughnuts, pancakes, muffins, and biscuits. Leavening agents in all quick breads are air and steam, and the majority of the items rely on the power of baking powder (3).

In the “My ‘Yummy’ Valentine” post, we discussed that the main component of wheat is gluten, which is a mixture of two proteins. When making shortcakes, a higher oven temperature (around 425°F) is used. This leaves enough time for carbon dioxide to form before the gluten in the flour unfolds, or denatures. This prevents the dough from becoming too extensible or stretchy, and creates the dense texture of the shortcake (3).

The fat used in shortcakes is solid and cut into small pieces before being added to the dry ingredients. Using the shortening in this way also keeps the gluten strands from unfolding, and adding sugar to the shortcakes will increase tenderness (1). The fats will also melt upon baking, which contributes to the formation of air pockets for the carbon dioxide (5). The liquid, or milk, is poured into the dry ingredients all at once to get a moldable dough without developing the gluten (3).

Making quick bread is definitely fast. It only took about 30 minutes for me to start the dough and finish the product. Once the bread is made, you will cut it in half and fill it with cream and apples. Feel free to use any type of cream you desire (whipped cream, custard, etc).

Tip- To solidify the coconut oil, simply put it into the refrigerator before using it.

I started the recipe by making Vegan Pastry Cream, a different version of custard from a previous post. I needed my household stock of regular milk for the shortcakes, and my housemate generously allowed me to use her soy milk. The vegan cream calls for flour as a thickener since there are no eggs in the recipe.

Place the flour in a small bowl. Whisk in 1/2 cup of the soy milk. Set the bowl aside. In a medium saucepan, whisk together the remaining soy milk, sugar, and salt. Add the items from the small bowl to the ingredients in the saucepan and whisk well to combine them. Mix in the cinnamon and pumpkin pie spice.

Cook the contents in the saucepan over medium heat for 5 to 6 minutes. You will whisk constantly to ensure that the flour doesn’t clump into a gooey mess. Remove the cinnamon stick after about 3 minutes.

Notice the thickened cream on the spoon.

You’ll feel resistance against the whisk as the mixture becomes thicker. If this doesn’t help you identify when the mixture is becoming thicker, then dip a spoon into the pan. If the liquid sticks to the spoon, then you know it’s thickening correctly!

Once thick, add the vanilla. Let the cream cook for one more minute before removing it from the heat. When the cream is slightly cooled, pour it into a glass baking dish. Cover it with plastic wrap and put it in the refrigerator. This will allow the cream to thicken while avoiding the formation of a film on its surface. 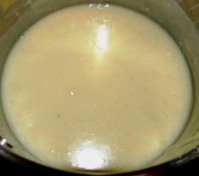 There you have it! Easy vegan pastry cream. The cream will be more gelatinous due to the flour. The cream has an altered consistency from typical custard, but it’s still delicious.

Time to move onto the shortcakes. Preheat your oven to 425°F. Sift the flour, salt, and baking powder in a large bowl. Then stir in the sugar.

Shortcake dough after adding the coconut oil. It looks like breadcrumbs!

Cut up the solidified coconut oil (or butter) into small pieces. Use your fingertips to rub the pieces into the flour mixture until it looks like tiny breadcrumbs!

This step took longer than expected. I mixed the coconut oil into the dough for about 10 minutes. Make sure that all of the pieces of fat are pressed into the dry ingredients.

The fat does not need to dissolve into the dry ingredients, because it will melt in the oven while the dough is baking.

Pour in the milk and mix it into the dough until a soft mass forms. The dough will be easy to use because it won’t be too sticky.

Use parchment paper, a baking sheet, or a clean counter for the next step.

Lightly flour a surface, and knead the dough lightly. Kneading makes the mixture uniform, promotes gluten formation, and creates flakiness in the final shortcake. You can spend 30 seconds kneading it, because there’s no need to incorporate huge air bubbles into the final dough. Roll the dough with a cup or rolling pin until it is about 1/2 an inch thick.

Cut out the biscuits using a cookie cutter that’s about 2 inches wide.

I used a heart-shaped cookie cutter, as it was the closest one I had for the size needed. I was able to cut out 4 hearts, but I had some dough left over. I rolled the small piece of dough once more and cut out 2 more hearts.

Put the shortcakes onto a greased baking sheet, and set them in the oven for 10-15 minutes. They will be done when they are risen and slightly browned on top.

As you can see from the picture to the left, the shortcake rose about 2 to 3 times in size. The texture of the shortcake was like a biscuit, but it was sweeter because of the added sugar and coconut oil.

Set them aside to cool. Now you can prepare the apples.

Slice and core about 3 apples of your choice. Green apples are used for many desserts because they’re naturally tart. Adding sugar to them will decrease the tartness but won’t make them overbearingly sweet. I didn’t have green apples, so I used Macintosh apples instead. Feel free to peel your apples too. However, I genuinely enjoy eating the apple skin. It tastes great, and it contains a lot of the apple’s nutrients (fiber, potassium, vitamin C).

Place the sliced apples, sugar, lemon juice, cinnamon, and water in a saucepan. Bring the contents to a boil, and then turn down the heat to let it simmer for about 7 minutes. The apples will become tender around this time.

There will be lots of liquid left in the pan from the boiled water. You can either drain the liquid, or keep it to use as a ‘sauce.’ I decided to keep it to pour onto my shortcakes, since the shortcakes do not become mushy when adding some liquid. Let the apples cool slightly before handling.

Take a cake and cut it in half. Then place the apple slices on the bottom slice. 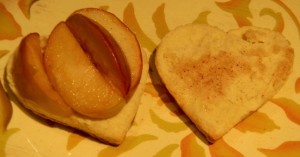 Put some ‘sauce’ on the other slice if desired.

Add the pastry cream, or the cream of your choice, on top of the apples.

You can place some more ‘sauce’ on top of the pastry cream if you wish.

Place the top of the shortcake onto the pastry cream.

Place some confectioner’s sugar on top if desired. 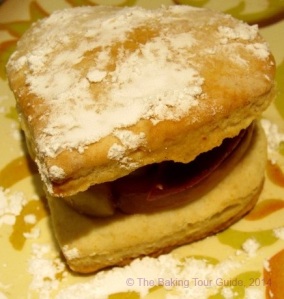 That’s all there is to it!

Take a bite and enjoy! Shortcakes are simple desserts, yet delicious and versatile. I’m looking forward to adding these to my repertoire in the future.

All nutrition facts are based on the USDA Nutrient Database.

Recipe for the Vegan Pastry Cream adapted from http://low-cholesterol.food.com/recipe/vegan-pastry-cream-70943

Recipe for the Apple Shortcake adapted from “Baking & Desserts: the essential recipe collection” published by Parragon in 2009.

Join 745 other followers
Follow The Baking Tour Guide on WordPress.com